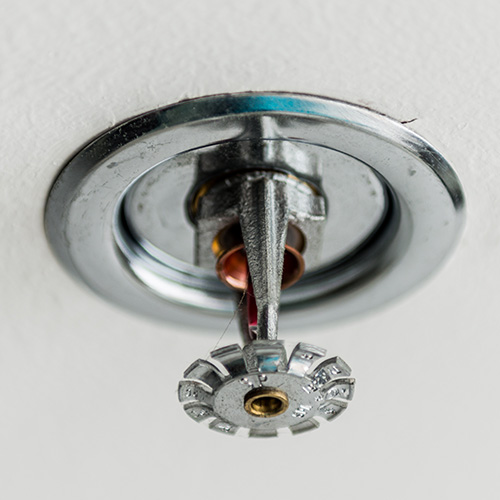 A devastating blaze can start from the smallest of sparks. Smoke alarms can be installed by a reputable supplier to give an early warning of a fire, but they are only effective if there is someone close to hear them, plus a recent study shows that over 95% of children, for instance, will sleep through a smoke alarm.

The Fire Service respond extremely quickly to notifications of fires, but with traffic congestion, we cannot expect them to respond any quicker.

Fire Sprinkler Systems: the most effective form of fire prevention

An effective, professionally fitted sprinkler system can dampen down even strong flames, with a very efficient use of water. There are various types of sprinkler system available depending on your premises, individual requirements and specific fire risks.

The most commonly used sprinkler and suppression systems are:

The installation of a sprinkler system can greatly enhance your property’s fire safety and, in some cases, is a legal requirement which must be undertaken in order to comply with the Regulatory Reform (Fire Safety) Order.

All ICO Fire Mist systems are tested to BS: 8458. The ICO nozzles are designed to be placed in the ceiling to look discreet and not clash with your interior, which makes them the most aesthetically pleasing nozzles available. With it you are also getting an ICO System Monitoring which provides real time alerts as phone calls or even SMS text messages, directly to your phone.

ICO Fire Mist fire systems are budget-friendly due to their revolutionary technologies.

They use less than 20 percent of the water compared traditional sprinklers.

To ensure your ICO Mist sprinkler system functions correctly, it automatically tests its pump once per week.

ICO also runs from a main water supply, which means there will be no large water storage tank needed.

The ICO Misting System works on a basis of a heat-sensitive bulb that when activated, releases a water mist which eliminates heat and displaces oxygen from the fire. This provides fast and effective fire suppression.

The ICO pump requires only 12lpm and is able to run straight from the mains, and that makes the system far easier to install or retrofit when compared to other mainstream sprinklers.

All fires start small, but can grow and spread furiously in an extremely short period of time. If caught early enough, damage can be minimised. Until fairly recently, fire sprinklers were mainly installed for the protection of commercial buildings, but residential installations are becoming more and more popular.

A residential fire sprinkler system is designed specifically for the domestic environment. All the pipework is concealed in the floors and walls, and the sprinklers themselves are small, neat and blend in with the decor. The heads are connected through a system of pipes to the water mains or an alternative secure source of water.

The process of installation is similar to putting in central heating, but with much less pipework, and thus less disruption. An adequate and reliable water supply is obviously essential for a sprinkler system. This can normally be obtained directly from the water mains.

If you’d like to discuss the needs of your home to protect from potential fire damage, please do get in touch and we can provide you with a free quote based on your own individual, residential circumstances. Then you can sleep soundly knowing your home and family are protected.

UK Building Regulations often require fire sprinkler systems to be installed in certain types of properties to ensure safety of occupants and they are often a requirement of insurance companies.

There are various types of Sprinkler System available, the choice of which to use is dictated by the use of the building where the installation is to take place.

Here are the main options:

Wet Pipe Sprinkler Systems
A wet pipe sprinkler system employs automatic sprinkler heads attached to a piping system containing water and connected to a water supply so that water discharges immediately from sprinklers opened by heat from a fire.

Dry Pipe Sprinkler Systems
A dry pipe sprinkler system employs automatic sprinklers that are attached to a piping system containing air or nitrogen under pressure, the release of which (as from the opening of a sprinkler) permits the water pressure to open a valve known as a dry pipe valve, and the water then flows into the piping system and out the opened sprinklers.

Dry pipe sprinkler systems are installed in areas where wet pipe systems may be inappropriate such as areas where freezing temperatures might be expected.

Pre-Action Sprinkler Systems
A pre-action sprinkler system is similar to a deluge sprinkler system except the sprinklers are closed. This type system is typically used in areas containing high value equipment or contents and spaces which are highly sensitive to the effects of accidental sprinkler water discharge.

Deluge Sprinkler Systems
A deluge system is sprinkler system employing open sprinklers that are attached to a piping system that is connected to a water supply through a valve that is opened by the operation of a detection system installed in the same areas as the sprinklers. When this valve opens, water flows into the piping system and discharges from all sprinklers attached.

``Throughout the scheme LCM acted in a professional manner, the site was well organized and the quality of workmanship was outstanding. During the construction phase LCM were found to be proactive and were more than willing to engage with all stakeholders in offering advice & expertise.``

Rochdale Borough Council
``We have used LCM on numerous occasions and every time they have worked in a very professional manner and delivered great results on time & budget.``

Whittles Jewellers
``Really impressed with how quickly Eco Sol managed to turn this project around, Within 24hrs of receiving the purchase order they had 2 teams on site to cover day and night work and get the project completed with as little disruption to our customers as possible,``

Nuffield Health
``It is fair to say we have been impressed with yourselves in the 3 big projects we have done recently, The speed and efficiency used in completing thiswork has been exceptional.``

Moran Logistics
-
``We will have no hesitation using the services of LCM in the future on planned and reactive maintenance along with new building works.``

Jackie Barrett
LIV Group
“...continuing to exceed expectations. We would have no problem employing LCM on future projects.”

Chris Savage
Biffa Waste Group
``...yet again LCM have proved their professionalism and great skills in this sector and have created a stunning new showroom for ourselves for which we are thoroughly delighted with..``

Whittles Jewellers
“At all times they have delivered in a professional manner, completing a multitude of projects to our satisfaction... we will have no hesitation including LCM on all future tender lists.”

Howard Hill
CBRE Asset Services
“I have found the services provided by LCM Group on all schemes to be of a very high standard. Their team is very courteous and professional to deal with.”

GET LCM WORKING FOR YOU